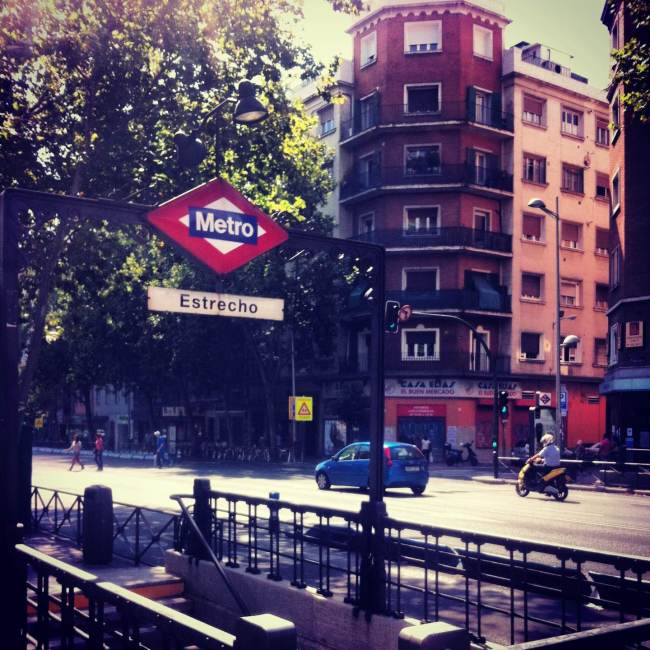 The Metro stop nearest my flat that I’ll walk to every morning for the next four weeks (or more) to get to my TEFL certification course.

“Calle General Yague, por favor,” I mumbled, barely above a whisper to my cab driver, the man I hastily selected as I exited Barajas Madrid International Airport and filed into the cab line, behind many others who lugged their suitcase or suitcases behind them.

The cab driver drove a beat up Mercedes Benz, the color of pearls gathered from a deep sea diving expedition, with black skid marks to and fro, a sure sign that he either he or other Spaniards weren’t the best drivers.

As he struggled to lift my two suitcases into the small trunk, making a dramatic grunting noise for the biggest of the two, I rolled my eyes and walked over to the right door of the backseat. By the time I had fastened my seatbelt and told him where I needed to go, he had already revved the engine and pulled forward.

My ride to the flat I’m staying in was no more than 15 minutes, just as Google Maps had stated when I checked the night before my 16-hour journey to Madrid, a journey that took me through three airports and ended in me leaving my passport in the slip in front of my seat, causing a momentary second of panic when I went to exchange my last savings, $2,000 U.S. dollars for what amounted to $500 dollars less in Euros.

Nothing is the same anymore.

It’s only been five days and already, I’m not the same person. I no longer wake up each morning with dread rolling around in my stomach, not ready to tackle another workday at a workplace and profession I have fallen out of love with. Each day holds a sense of mystery; I don’t know what I’ll be faced with or what to prepare myself for. This is both exciting and terrifying.

Confusion and frustration steadily trade off on becoming my middle name, and I suppose it’ll be this way for quite some time, until I fully adjust. I realize I had some lofty and unrealistic expectations that it’d be easy as pie (because I had been yearning to move here and start my life in a new direction). Or at least, I didn’t take the time to think about what difficulties and challenges would be mounted up against me.

And believe me, there are plenty.

I don’t feel confident speaking Spanish, although I know the bare minimum to order a meal, ask for a drink or engage in a conversation if I get lost. Before any words fumble from my lips, I’m second guessing myself. I’m running a quick Google translation on my phone to see if what I’m thinking is in the ballpark of what a Spaniard would say. Will I be found out if I say something stupid? Will they look back at me and know that I’m a pathetic American struggling to take on a language that she didn’t grow up speaking? Even things I used to enjoy like grocery shopping are now difficult, as labels I don’t understand stare back at me.

Owning the title of being an adult is daunting as well. I paid rent for the first time five days ago. I folded up several Euro bills and handed them over to the sweet, older Spanish woman who I’m renting a room from. She smiled and took the bills between watching a show on television. She didn’t realize how huge of a step, a moment, that was for me. For her, I was yet another tenant that she has graciously, kindly and warmly taken in, but still, just another person that is helping her meet her own cost of rent to her landlord.

I’ve had to create a budget and determine what I will and will not spend the little money I do have until I finish my TEFL course, find work and start earning money. Each time I Skype or Facetime my mama she tells me, almost in a patronizing tone, to let her know if I end up in a financial bind. I hear her, and I know she worries. I’m her oldest daughter and her only daughter that has ever dared to move to another continent, but I’m determined to make this work, even if that means I’m eating crackers, meat and cheese for a few weeks to say that I remained within budget and took care of myself.

The hardest part, the most disheartening part of all, is that I can see, almost a mile away, that things have already changed with the people who I called close and dear to me before I left the States. I can already see that no matter how many Skype convos, Facetime sessions, stray iMessages or Google Hangouts, that eventually, they’ll stop wondering about my life on the other side of the world. Our conversations and the way we relate will change and fade away in unexpected ways, and I’ll no longer feel home with them in the way I used to. I’ll become a stranger, despite my best intentions to keep in touch and find common ground.

And I hate to admit it, but right now, in this moment, I feel very alone. Because none of the loved ones I’ve left behind truly know how this feels, to be stuck in a weird, awkward  way between two worlds and trying to figure out where you’ll fit in–on one side over the other.

I love it here.

4 thoughts on “the expat existential crisis.”