Ask anyone (who really knows me) about my dating life pre-expat life and they’ll readily tell you how horrendously awful it has been–a clusterfuck revolving door of men whose adoration of me fell too short and mine for them, lingered on despite needing to be obliterated.

Before I moved to Madrid, I had this fantasy concocted in my mind (and perhaps it has everything to do with being a hopeless romantic) which entailed me moving thousands of miles away, being whisked away into the sunset by a charming, handsome Spanish man and giving word to family and friends via email that we’d been married in a Spanish cathedral, one so beautiful it induces it tears once you’re inside and gazing up above at it, feeling incredibly small, while the stained glass windows reflect and refract haphazardly against your face as the sun streams through them.

Nothing close to this fantasy as happened. In fact, it’s been quite the opposite.

I’m…single. Perhaps just as single as I always have been, the singleness for long periods of time I’ve become accustomed to. I get dolled up on the weekends hoping to catch a stray glance and…nothing. Nothing more than the pestering from the bartender to buy another drink because I’m staring listlessly into space instead of deeply feeling the throes of the gin or vodka or tequila I’m casually sipping on, rather than chugging like I used to do in my college days. My lack of enthusiasm is bad for business, apparently.

The sense of invisibility I feel from most of the men here is palpable and discouraging and damn near encourages some inkling of insecurity. Even when I feel I’m looking my best, even if I look at myself in the mirror before I leave for a night on the town and am self-assured I look amazing, the men look right through me like I’m glass.

About a month ago, something out of the ordinary occurred. I was out at an Irish pub here known to be flooded any night of the week with Americans (and everyone speaks English). I ended up there by chance and it turned into a whirlwind night…beginning with a man staring at me from across the room.

The first few times I noticed his gaze, I chalked it up to mere coincidence. Maybe we both were looking across the room across at the same moment and our eyes collided with one another.

But the gazes persisted. And a few drinks later when I stood to go directly to the bar since my next drink order was taking looking than I anticipated, he stepped in front of me and looked at me in my eyes, full frontal, with adoration. Seconds later, he was whispering in my ear, while brushing back my big, crazy, bushy, curly hair and telling me I was beautiful.

I was stunned. I had on my big “geek” glasses. No makeup. A lazy outfit. I almost didn’t come out that night because I had cramps and was exhausted. But here I was, being told that yes, something within me resonated with someone else, outside of myself.

Nothing came of this interaction with this beautiful man, with warm-colored caramel skin and green eyes and a dazzling smile, but I still think about this interaction. I think about how my ideal of beauty, for myself, is in flux, limbo. I stopped getting relaxers almost eight months ago and was “transitioning” to natural hair (up until I cut all my locks off last Friday), meaning hair that isn’t chemically manipulated to be straight and instead letting my kinks and coils and curls have their way. I’ve never known my hair to be any way than relaxed, as my mother first put a relaxer in my hair at five-years-old. Straight hair just became too boring and I wanted to try something new. I wanted to become reacquainted with myself. 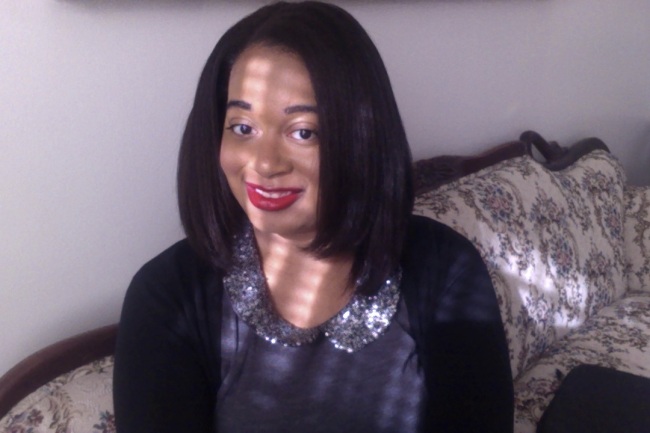 Christmas ’13. I got my hair straightened just for the occasion.

But that’s not to say that I haven’t been plagued with insecurity since I embarked on this “natural hair” journey. There was a stark contrast between the soft curls of my roots and the parched, coarse ends that were previously relaxed. For eight months, washing my hair almost always ended in tears and handfuls of hair falling out from tedious detangling sessions.

And most of the time before when I did style my hair, whether through twisting it and braids, I looked like Medusa’s ex-stepsister when I’m done. I never truly felt confident with my hair before which made it perfect to resort to a headwrap to hide my shame and frustration. I’m still not secure with my hair and how it looks on me even post-big chop. I’m stunned each time I realize what I’ve done. I was supposed to feel more liberated and relieved, only now, I just feel more confused.

It’s a process, I know, but receiving attention from that man, a beautiful one at that, when I was feeling the most delicate about my hair, when it was just obnoxiously big and unruly, raised bigger questions for me: how many other women of color, Black women, feel these same feelings with their tresses not being the long, luxurious, generally preferred Eurocentric ideal? And how much of my lack of being approached is about men being plain-out confused about how my hair looks (or even wondering why I’d don a headwrap) and what it means?

I never thought that the natural state my hair is intended to be in was such an anomaly or radical until I’ve had to deal with the reactions from the people here. The first time I decided to wear a headwrap to teach English, when I was still teaching at that God awful primary school with small children, the kids took one look at me, pointed at my head and laughed until they were rolling on the floor. I was flabbergasted and humiliated. I had no one to talk to about this experience, however, because I was the only Black teacher in my school. I had to swallow what felt like a mass of concrete in my throat and keep trucking.

Even now since I’ve moved on and am now teaching in a secondary school (a high school), I get the same nods, but in a different way. I show my students old pictures from when my hair was straight and long and they comment on how beautiful my hair was. No comments are dedicated to my curls or headwraps though, although I’m sure the whispers and long stares mean they’ve noticed.

This is precisely why dating in another country, where cultural and racial differences abound can be difficult, frustrating, involving a plethora of missed cues and notions. And maybe, just maybe, being single isn’t so bad, and maybe it’s just the right route for me, at this time, at least until I can become less lukewarm about my standards of beauty–namely embracing Afrocentric ideals and tossing the Eurocentric ones into the dust to be left behind.

One thought on “dating doozies.”