As the overpowering scent of chlorine invaded my nasal passages, I held my breath and tiptoed through the locker room at Agnes Scott College in Decatur, Georgia. My mother had enrolled me in my first, official swimming lessons and although I’d been “swimming” for years, she thought I could use special instruction from those who actually knew what they were doing— lifeguards.

That first summer, I had to be around eight or nine, started a yearly tradition of summers filled with quickly changing in the girls locker room with the slick, sticky and ancient tiled floors, holding my breath so the chlorine and bleach smells didn’t give me a headache, as they always did when I was submerged in the water, panting, blinking furiously and trying not to complain from the burning of my eyes.

Many, many, many times, although I was being guided by my instructor, I felt out of control, powerless to the depths of the water. Often, even when my instructor explained to myself and my classmates what we’d be doing and demonstrated, it seemed so easy, but when I attempted it was a complete flop. My most vivid memory of such instance is when I was a teenager and almost finished with all the levels of swimming courses. This class was strictly on diving in the deep, twelve feet end. I scrapped my knees on the side of the pool several times, streams of amber trailing behind me as I attempted to touch the pool floor.

This past weekend when I celebrated my 28th birthday in Palma de Mallorca and spent the bulk of my Saturday sunbathing and frolicking in the Mediterranean Sea at Cala Major beach, I had a deja vu moment. It was one of the few times I ventured out into the water alone and thought I had my footing, but the aggressive waves slapped me back. Once this made my bikini top fly completely off and I was rendered topless. Another time, I was pushed underwater, the salt water burning my pupils and stinging my nose, forcefully shoving frigid, salty water down my throat and causing me to scrape my left knee on a rock on the bottom of the sea. 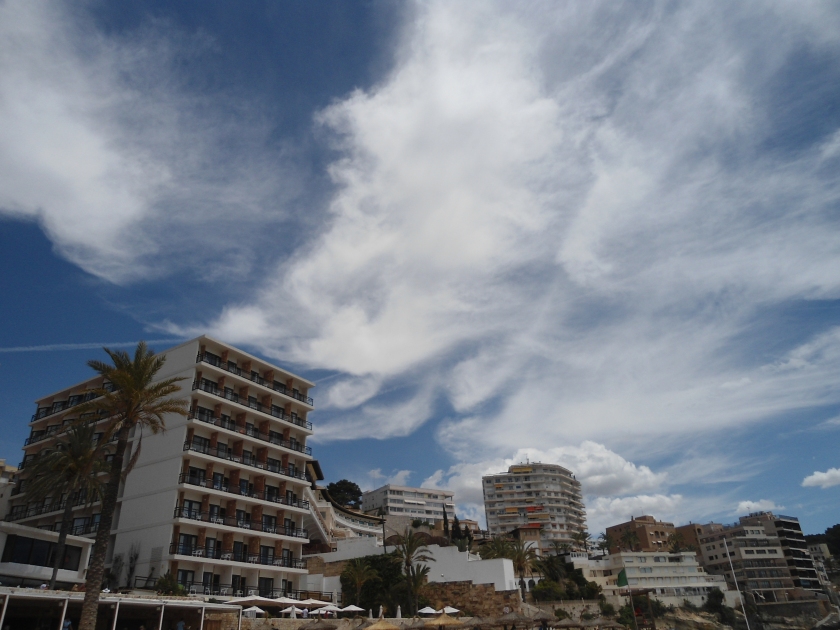 But I fought and laughed through it. Eventually, I was panting and limping back to the shore, collapsed on my towel in the sand and napped for fifteen minutes, completely drained and exhausted. The waves had not certainly not killed or defeated me, but it had zapped me of any energy I had before.

Which, ironically, is what I can say about my experience living as an expat in Madrid for the past eight months. There have been countless experiences where I was slapped around, forcefully shoved and left drained and depleted as a result of circumstance. Whether it was weathering delicate (and dysfunctional) roommate situations, withstanding teaching jobs which took everything out of me although I showed up everyday determined to make it work, losing friends from back home and realizing newfound friends I’d made here weren’t the best fit, coming into my own as an adult woman and standing on my own two feet.

And although none of these things have defeated or killed me, they’ve shed so much clarity on life as I know it and the path I want the rest of my life to continue to take, beginning with leaving Madrid, ending this Spanish journey. In nine days.

To be fair, this wasn’t a decision I made with haste or without much deliberation. I knew at the end of February when I was asked whether or not I wanted to renew my current contract with the Spanish Ministry of Education teaching in a high school. I knew, rather, that I wanted to return home, to stop forcing myself to be someone I wasn’t or enjoy a job or country I’m not happy in.

I’ve spoken at great lengths about the racism I’ve been affronted with in Madrid, and it’d be wholly dishonest for me to say it wasn’t a huge factor and not wanting to continue to live here. I’ve expressed at many junctures the frustration of being both a Black American and Black African here. I’ve either received empathy from those who agree with the racist notions which abound in this country or those who are so engrossed in their privilege they don’t even notice it, let alone their participation in the perpetuation of systematic racism and hatred of people of color.

Privilege is the main thing which irks me about all the micro aggressions and othering I know to be by-product of long-standing ignorance and racism, rather those who just don’t seem to get it, even other people of color, and tell me I should take the respectability route. Those who suggest to me I act as a bridge to cultural understanding and undertake the (unwanted) burden of shattering stereotypes and incorrect, negative cultural and racial assumptions.

I’ve arrived at such a place of pride about Blackness and my Nigerian heritage, and no, my existence has never and will never be to be an ambassador or tolerant of the ignorance of others. I don’t have to be understanding of White privilege. I don’t have to be understanding of why people think the way they do about Black Americans and Black Africans and give them a pass. I won’t accept being told I’m “overly sensitive” or that I have a “chip on my shoulder” or I should “stop reading into every little thing.” I won’t be told just because I look different and have a different name to expect to be treated differently because of the curiosity of others and to be open to it. And I won’t. I simply won’t.

I’m not here to assuage guilt, make myself understood or to constantly explain myself, and I’d much rather not live in a country which I feel is committed to misunderstanding me and people like me.

On the flip side of the coin, my vocation is not to teach. This I know undoubtedly after trying (and failing) to transition to what I Initially thought would be a complete career change before moving. I’ve taught adults, I’ve taught children, I’ve taught really young children and I’ve taught teenagers in my short TEFL teaching stint. The lessons and insights I’ve gained about myself are truly endless, but one thing I know overall is writing is not something I can run away from. To run away from my vocation, my calling, my purpose is akin to running away from myself.

And yes, I can admit my move to Madrid was pre-meditated as an escape, a flee, running away as fast as I could. I ran away from a lot: the familiarity (as well as predictability and boringness) of home I had grown tired of, family issues, constant disappointment with friends, a pathetic (and nonexistent) love life, impending doom about the direction (and shape) my writing career was taking, exhaustion from being broke and my talents and passions not being valued and appreciated.

I thought the magic solution would be to move thousands of miles away to start over from scratch. Of course I had goals. I wanted to finally become fluent in Spanish and relish in the Spanish culture and…la la la la la la. Instead, what I have found is that the things I ran from never disappeared but morphed into a new form. Because you can’t run away from yourself or your problems or your issues. You have to dig deep and conquer them, conquer your demons.

After going through endless changes with teaching: being fired, dropping classes which weren’t a good fit for me, payment not being on time or the proper amount or not receiving it at all, dealing with shitty language academies who just deemed me yet another native English speaker and treated me with no decency or respect for my time and what I had to offer.

I found myself after finally getting a coveted position with the Spanish Ministry of Education in a high school, where I was finally getting paid a steady, livable amount and working 16 hours a week in a rather lax working environment, that I was still not happy.

My coworkers were everything I’d wanted in colleagues: genuine, kindhearted people. They respected me as native English speaker and treated me as such. They valued my knowledge and wisdom about the many idiosyncrasies of the spoken (and written) English language. There was an open door policy where I could express concerns or issues I had with certain classes or students.

And yet…there was a gaping hole. A longing for more. A decided feeling there had to be more for me to look forward to, to be excited about.

After a few weeks, mornings became a new routine of dread. I’d sleep later and later to avoid getting up and slugging through teaching classes I didn’t want to teach. Several times the teachers would forget to send the groups of students to me in the library where I held my English classes, and I’d be holed up in a room for hours at a time, with only the birds outside the windows bordering the room and the echo of my own voice to talk to. At the end of each day, I felt drained and dragged myself back to my flat, ate lunch and passed out for siesta. Rinse and repeat for the four days a week I worked. I was living for the weekend…again. This was exactly the kind of pattern and mentality I had wanted to escape in my old life.

At the end of February when I was asked to renew, I knew the answer would be no, but yet I hesitated. How could I give up this Spanish journey so quickly? I’d told so many people I’d probably be here for years. What would people think if I packed up just shy of a year? They’d think I was failure. That I was rejoining the ranks of everyone else, caught up in the working grind. That’d I’d somehow been wrong about choosing to be an expat in the first place.

But then I just said no. A still, sure, strong, no. I said no, and felt for the first time a months, a peace I had been longing for. I knew I could put an end to all the fighting, forcing myself to fit the mold of an English teacher when I knew my heart had never been in it, that I’d pursued it for the wrong reasons. And that all this time, the only thing which had given my transformation, this journey, any meaning in the first place were my words.

I needed to tap into another part of me I hadn’t known existed to write honestly, vividly, vulnerably. Moving thousands of miles away had finally given me the courage to write from the heart.

In nine days, my Spanish journey may be ending, right at the nine-month mark, but this new direction is spiraling out into something uncharted, uncertain, unknown, yet incredibly beautiful. I will be moving to Washington, D.C., a city I fell in love with last summer weeks before I moved to Madrid. I knew it’d be on my short list of places to live in at some point after spending time there and things have worked out amazingly for me to live there post-Madrid.

I am leaving. But it’s not the messy, storming out because I’m angry, leaving. It’s the walking towards hope, wonder and newer horizons. It’s clean slates. It’s creating an optimum life fit just for me.